What Is Sultan of Kelantan’s Birthday in Malaysia All About? 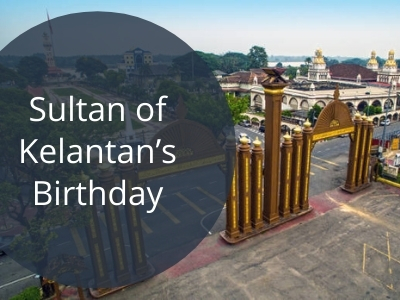 Sultan Muhammad V, born on the 6th of October 1969, is the current Sultan of Kelantan. He served as the 15th Yang di-Pertuan Agong of Malaysia from 13 December 2016 to 6 January 2019. He was the Sultan of Kelantan on 13 September 2010, succeeding his father, who was deemed incapacitated by illness.

On 11th November, the state of Kelantan celebrates the Sultan of Kelantan’s Birthday with a public holiday. The current Sultan, Muhammad V, is well-loved by his people, and his birthday celebration is filled with enthusiasm.

Things to Do During Sultan of Kelantan’s Birthday in Malaysia

Kelantan in Malaysia will always be any traveller’s dream destination. This is because of its architecture, historical places, paddy fields, rustic fishing villages and many more. Although it is a part of Malaysia, the culture and lifestyle in this state are somewhat different. The state also translates as the “Land of Lightning”.

Because this state is close to Tak Bai Thailand, there are beautiful Buddhist Temples you can visit. Don’t forget to check out Taman Negara Park on this eventful day to enjoy nature. Try the delicacies of Kelantan like Nasi Dagang, Nasi Kerabu, Laksam and many more. You also wouldn’t want to miss the tallest waterfall in South East Asia, located here in Kelantan.

How We Celebrate the Sultan of Kelantan’s Birthday

The Sultan of Kelantan usually celebrates his birthday with a prayer in the day, continued with a Royal Dinner and performance at night.

It is a public holiday for all the citizens, as His Royal Highness, the Sultan of Kelantan’s birthday. The good news is they can do anything they want with their free day.

On this special day, there are many special events! A good example would be to hold a marathon in conjunction with the occasion, which can also be used to raise funds for charity purposes. This will not only encourage people to do good, but it will also promote a healthy lifestyle among the citizens. It’s like feeding two birds with one scone. Besides that, hosting charity dinners to raise funds and awareness can also be done. For instance, they can contribute to the down syndrome association or even an orphanage. The Sultan of Kelantan also leads prayers in the Kelantan state mosque. This will set a good example for future generations.

The Sultan of Kelantan can also lead a prayer in the Kelantan state mosque. Thus, setting a good example for future generations.